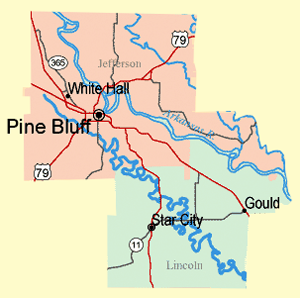 The Sixth Division is part of the Jefferson-Lincoln County Circuit Court system, which is also known as the 11th Judicial District West, consisting of Jefferson and Lincoln Counties.

While on equal footing with other divisions of the circuit court system, Division Six is unique. All cases involving juvenile offenders or other juvenile matters which come before a circuit court in Jefferson or Lincoln counties are assigned to Division Six. Judge Earnest E. Brown, Jr. presides over the court.

There is good reason to assign juvenile cases to one court organized and staffed to handle these cases. Laws governing how juvenile cases are handled mandate certain confidentiality requirements not imposed on adult cases. Juvenile offenders must also be incarcerated separately from adult offenders.

To effectively meet these and other unique legal requirements in handling juvenile cases, and to properly and legally afford juvenile offenders their full rights in the legal system, by mutual agreement among the courts of the 11th Judicial District West, juvenile cases are assigned to Division Six.

Juvenile Court is the entry-level, first exposure that many young people will have to the American legal system. It is only at this level that the legal system can take on an additional responsibility of making the first exposure to the system, the one and only.

Types of cases heard by the court

The court hears three types of juvenile cases. Click on the case type below for more information.

On rare occasions, the court may also hear adult criminal or civil litigation cases normally assigned to other division of the court when a conflict of interest causes a presiding judge to recuse from a specific matter before the court.