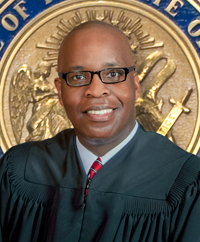 Judge Earnest E. Brown, Jr., presiding judge of the Circuit Court 6th Division, 11th Judicial District West of Arkansas was elected to office for a six year term May 20, 2008. He was sworn in to the office January 1, 2009.

Formerly, he served as state representative for legislative district 16 in Pine Bluff and was assistant speaker pro-tem for 4th District. He was also a member of Judiciary Committee, State Agencies and Governmental Affairs committee, co-chair of the Legislative Joint Auditing State Agencies sub-committee, alternate on the Joint Public Retirement and Social Security Programs committee, and Secretary for Arkansas Legislative Black Caucus.

Active in his church and recognized for his volunteer work in the community, as well as pro-bono professional services, Brown has received numerous awards and recognitions.

Judge Brown is married. He and his wife Tina have three children.

Judge Earnest E. Brown, Jr., and the 6th division staff are all smiles as they show off a $25,000 check from a grant awarded to the court by the Simmons Foundation Tommy May Make a Difference Challenge. The Jefferson County Quorum court voted to match the grant. Judge Brown says the funds will support work with children of single parent homes.